Truthfully, I have put this on my posting schedule several times, but never got around to actually writing the post until now. (Even now, I wrote this first sentence two hours ago then started researching school options for next year.)

This year I have been doing a Letter of the Week program for Noah, and it has been great. He really has made a huge amount of progress and the activities have been fun. However (and a big however), it is kind of time-intensive for me with planning and preparing all the activities, so it doesn’t get done with consistency. I am not sure what we will be doing for school next year, but I do know that public school will not be an option. We are looking at PK4 programs in Washington DC, but if we live in Maryland, then I will be homeschooling him and using a purchased curriculum. We shall see…

Anyway, we have gotten through P, and this is what his closet currently looks like.

There will be some un-done activities which I will still share with you. It was a combination of me being busy, Christmastime, and Noah deciding when he does or doesn’t want to do something. (Yesterday, his Sunday School teacher used the word “defiant”. Yup.) Also, not all letters are used equally. Some, like O (and Q, for that matter), are not easy to plan for. 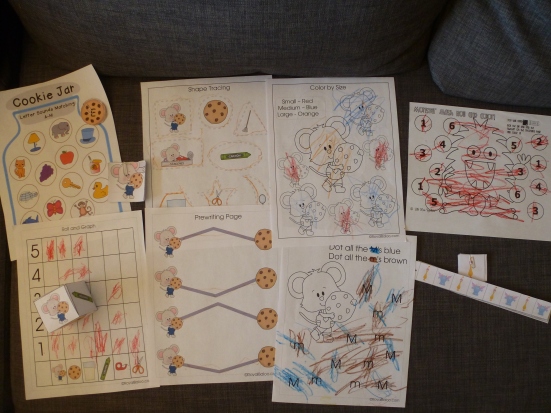 M was for mouse, monster, monkey, and moose/muffin. I kind of majored on the “If You Give a Mouse…” books this week, as well as the show on Amazon. He really loves it! I appreciate when kids’ books are made into tv shows, like Mouse, Llama Llama, and Curious George. I found a great packet that went along with “If You Give a Mouse a Cookie”, which included a graph, shape tracing, capital/lowercase M’s, a puzzle, and size comparisons. I also did a cookie jar initial sounds matching game, which was fun.  This one was A-M, and I’m keeping N-Z for later. Monsters was a dice game, patterns with monsters, and balloon science. There is a monster drawn on that balloon, it just didn’t really show up well when it was super blown up.

I also found an amazing Curious George packet, which he loved. There was practicing spacial reasoning, sorting, and making words with Bananagram pieces. I also printed out a coloring page, but he wouldn’t do it. The final day of M was moose and muffin, but we were all sick and it just fell flat. I had a muffin tin counting activity that he refused to do, I intended to read “If You Give a Moose a Muffin” and have him help me make muffins.

I found so many amazing resources for N! N was for night, ninja, nativity, and Noah’s ark. The capital N on his closet is a moon and stars, which were stamped with some cardboard and paint. It wasn’t ideal, but it worked. There was a great unit about nocturnal animals, including a little book to color and a color-by-number page. Notice that it’s blank… He also followed the fox to it’s den (a simple maze) and sorted animals by which direction they were facing (here). He hasn’t seen the Ninja Turtles, but he has a TMNT cup and always comments with my husband wears his TMNT shirt. Noah really enjoyed these! From this packet, we did tracing, patterns, a dice game, small-medium-large, and a strip puzzle with numbers 11-20.

Since it was so close to Christmas, I did N is for Nativity. We made a nativity ornament using popsicle sticks and a “watercolored” coffee filter. Then there was cutting practice and a nativity set he could play with. Another packet had sorting, initial sounds, letter matching, an animal booklet, sequencing, and making words with tiles. I took the opportunity to capitalize on Noah’s name and did Noah’s Ark. There was sorting capital/lowercase N’s, a counting clip wheel, and graphing to help the animals get to the ark. I was going to do an “All About Me” book, but I couldn’t really find one that was appropriate for his age.

O was hard. It was the week of Christmas and he just wasn’t having it. We did octopus/ocean, ornament, and owl. There was a puzzle with shapes (featuring ocean animals), the octopus for his closet, and a paper plate octopus with beads on his tentacles. There was also a strip puzzle that didn’t make the picture, and a book about the ocean from the library. Ornament was the lowercase o on his closet, and then the tree, wreath, and snowflake ornaments. We didn’t have a tree, but they got put with the other Christmas ornaments for next year. Then we sponge painted an owl, he wrote O’s, and we did a initial sounds Christmas game.

P was penguin, present, puzzle, and pizza. I adapted a slightly more mature penguin activity to make it preschooler-friendly by reading the words, having him match them to where they are on the penguin, and then using tiles to make the words. We played a game where he held a ball between his knees and tried to walk, and he did the Penguin Freeze Dance and the Reindeer Pokey on YouTube. Ya’ll, that’s a workout! For pizza, we did an activity with ordinal numbers, a make-a-pizza activity, and he got to play with a felt pizza that I made. We also had English muffin pizzas for dinner!

We made the “p” present for his closet using leftover wrapping paper and ribbon, then he used his Christmas present (magnet tiles) to complete some puzzles that I made for him. He also did some new jigsaw puzzles he got for Christmas, as well as a puzzle showing the different ways of showing the number 10. I had some color-by-letter pages, but he wouldn’t do them.

Most of these ideas are borrowed, but you can find all these and more on my Pinterest board (here). If you’re interested, check out A-D, E-H, I-L.

Hi, I'm Rosebud. I am a Navy wife and mom. I love sewing and creating, and this is my little corner of the internet to share my projects.

A true story of love. On the left is almost 2 year old Pinky the unicorn, on the right is a brand new Pinky (a spare).
How did you spend YOUR Saturday night?
Tim took the car so we couldn't go to storytime at the library this morning. I told Noah to choose some books for our own storytime and this is what we got. #raisingthemright #littlebooknerds
After-Christmas fun at an Oregon park.
Merry Christmas!
Saturday story time with @nixon105 . Aunties are more likely to read the same books over and over. ❤️
Follow Rosebud‘s Quilts on WordPress.com